One Story of the Inbreds

"This is probably my favourite bio ever written about the band.  Most of the early ones were self-produced, but this was put together by a 'paid expert'.  We were just about to release Kombinator in the U.S. through Tag/Atlantic, and this would be sent  around the world.  The in-house writer at Atlantic Records, in charge of press-releases and artist bios, interviewed us for one long afternoon to come up with this treat. This was the result of...surely...the longest-ever telling of the Inbreds story" - Dave 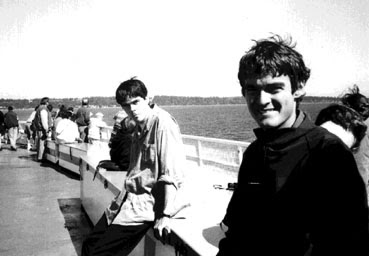 It all begins with a dream. Mike and Dave wanted to play some songs before their peers at the university-sponsored battle of the bands competition. Despite their enthusiasm, the two were summarily denied entrance in an incident that has now been chalked up to "character building." But as the bureaucrats at Queen's University in Kingston, Ontario and indeed the world would soon find out, you just don't mess with Mike and Dave- known collectively as the Inbreds (insert diabolical laughter).

They're the Inbreds? Yep. That's it: only two of 'em. With a grocery list that includes ingenuity, talent, a handy capo, and a neat little fuzz pedal (to expand the dynamic range of the bass guitar), the Inbreds have since become one of the most unique and melodically soulful duos within earshot. Far more than a mere rhythm section, the band's sound is both raunchy and pop, minimalist and full. While their singing and songwriting can verge on the sweet, the band's overriding rock tendencies and masterful manipulation of home recording equipment place them in league with such bands as Sebadoh, Built To Spill, and the Grifters. Thus we find ourselves contemplating KOMBINATOR, the group's PF/TAG Recordings/Atlantic debut, their first single "Any Sense Of Time," and a video about a globe-trotting bicycle.

* * *
The Inbreds formed in January, 1992, in Kingston, after an impromptu jam session in drummer Dave's attic, when his brother/producer Thom was heard to utter the now famous words, "This will work." Prolific from the get-go, the pair recorded a tape called DARN FOUL DOG on their four-track, duplicated it at home, and released it on their own newly-formed PF Records. To their considerable surprise, the cassette-only PF #001 (a bargain at $2) sold 500 copies. The community-minded PF (Proboscis Funkstone) has now amassed a catalog of over 20 releases, including outings by pals Los Seamonsters, The Hammertones, The Caspers, and Yellowbelly, as well as the entire Inbreds output.

* * *
From early on in life, the signs were there that Mike and Dave had something to say musically. "The first song I ever wrote was on ukulele and it was called, 'I Like Big Bird,"' says Mike. "That was grade three. Then my brother Joe sat on the ukulele and cracked it terribly but then I could bend the neck back and get all these intense sounds." Mike first acted out his percussion obsession as a child by constructing homemade drums from buckets and empty fertilizer bags. He jumped to the Mattel electronic drum pads before finally graduating to the real thing. Luckily, mom and dad didn't seem to mind the noise.

The two first met in 10th grade science class in Oshawa, Ontario. "I was dropping some science," says Mike, who testifies that, from the beginning, the talk was always of music. They'd discuss favorite Beatles songs, the genius of Brian Wilson, bust LL Cool J rhymes, and agree to disagree about heavy metal. Soon, along with some classmates, they were getting together to plow through the usual set of basement covers--after which they'd all reconvene at McDonald's to toast the gods of rock over carbonated beverages and sesame seed buns.

Entrance into Queen's University saw Mike pursuing an ill-fated chemistry degree and Dave taking the first steps towards degrees in finance and philosophy. For Mike, the concept of higher education didn't hold much interest. "But we wanted to form a band and I was interested in that for sure," he says. "We took out a few classified ads to find some other people we could play and get along with, but it turned out to be a hopeless cause." They withdrew their "musicians wanted" ads and pressed on as a guitar-free duo.

"The whole bass and drums combination came about simply because it was convenient at the time," says Dave. "Initially, there was a little naivete built into the idea but, for us, it was all about songwriting." "It was all about picking up our instruments, playing, and recording whatever happened," says Mike. "At the outset, there were a lot of pent-up ideas and they all came together very quickly."

To subsidize the band's emerging equipment, touring, and recording needs, Mike and Dave were relegated to a series of soul-stealing minimum wage forays. Still enrolled at Queens, Mike was working at a school cafeteria. "It was killing my social life," he says. "Even years later people were still saying to me, 'I know you - you're the ice cream man.' And they weren't talking about David Lee Roth." During that period of food service oblivion and hair net stigmatization, Mike was typically blowing paychecks on rare pre-war blues records by the likes of Blind Blake and Blind Willie Johnson. Throughout that time, Dave was pushing shopping carts into neat rows while his mind wandered through big life questions and new songs.

Like any pair of long-time friends, Mike and Dave have developed a language of their own, for which the goal is pure comedic distraction. They freely rehash each other's most embarrassing moments with a few choice words, quote favorite films, or tell old Guy Lafleur jokes. They've spent the better part of three years in each other's constant presence and, to their friends' dismay, they still hang out during days off.

In June, 1992, as the follow-up to DARN FOUL DOG, the band released the LET'S GET TOGETHER EP (PF #004). In early 1993, they stepped up to a rented 8-track recorder for the EGROG EP (PF #005). It was then the Inbreds became the pride of Queen's University with their victory at the school's battle of the bands competition. First prize, oddly enough, was a guitar. "It was a Washburn heavy metal-style guitar with that child-stabbing end," says Mike. "People thought it was so funny we'd win a guitar but I've actually written some songs on that thing."

Later in '93, their "no budget" video for the song "Prince" was played on MuchMusic's "Indy Street," and the 21-track HILARIO album (including highlights from their previous 7 inch and cassette releases along with seven new songs) blasted up the Canadian alternative charts. Last summer, the highly mobile duo embarked upon its first national tour (the opening show ended abruptly when the club's kitchen caught on fire!), finishing with a rousing set at Toronto's Edgefest with the Lemonheads, among others. Just prior to KOMBINATOR sessions, the Inbreds attempted their first New York City show at the New Music Seminar, but were turned back at the border for attempting to enter the United States without proper work permits.

For Mike, the band's chief songwriter, a number of KOMBINATOR tracks found their beginnings while he was cleaning out cars at the Kingston Budget car rental outlet. Something about the drone of the vacuum seemed to take him to another place. "I'd be vacuuming out a car and be playing a song in my head to the drone of the vacuum," says Mike.

Their first "real" full-length album - and entrance into the newly-launched, Atlantic-distributed TAG Recordings family - was completed within one week at Toronto's Gas Station with producer Dave Clark (ex-Rheostatics, current Dinner Is Ruined drummer). KOMBINATOR, says Billboard, "deftly melds considerable power pop savvy with a decidedly low-fi aesthetic." The 14-track release, already a #1 hit on the Canadian alternative charts, finds the duo hanging out their personal issues with a stream-of-conscious knack for taking listeners right to the moment of truth.

"Any Sense Of Time," the album's first single, reveals its heart in a melancholy chorus that gains emotional resonance with each sonorous repetition. "I'd be glad if it strikes people that way," says Mike of "Any Sense Of Time," "because I was writing lyrics for this record right up until the last minute." The imagery-intensive pining continues on tracks such as "You Will Know," "Turn My Head," and "She's Acting." Intentionally or not, there's even a bit of poetry to be found in those songs. "I'm definitely into some of the more romantic stuff that Yeats wrote," says Mike. "I like to think I have those same feelings. Reading his poetry can make you blush." Mike's tendency for soul-baring romantic confession within his own songs might make him blush as well if you confront him on it. "I always die by the sword," says Mike. "When I write - especially when I'm dealing with my personal life - I always make an attempt to describe the way I'm feeling. But that's where you get burned, right. It's the people who never say anything... they never get burned because there's no evidence. There's way too much evidence on me- gosh, embarrassing stuff. It's so crushing." Dave can't help but snicker at his bandmate's plight. He can because, except when he's behind the kit, Dave is one of the quiet ones. Maybe that's why they can tour across Manitoba and still be friends by the time they hit Alberta. 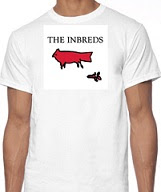 You can get all of Mike's solo albums here.

You can get all of Dave's solo albums here.